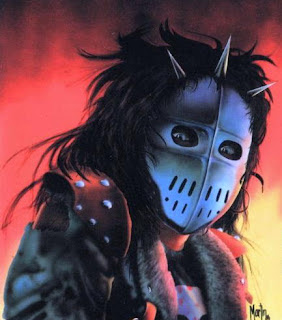 Exumer's sadly unheralded heavy metal mascot (the "Halloween Guy") was created by the ironically unsung Martin Apholdt in 1986. Exumer vocalist Mem von Stein, who now leads Brooklyn metal merchants Sun Descends: "We asked the guy to come up with an idea for the album design based on the title of the first album, "Possessed by Fire." We kept him for the second album and he took the masked guy and applied to the title of the follow-up, "Rising from the Sea"."