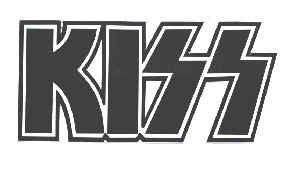 The symbolic sigil of KISS - you know, the one that rallies all those Knights in Satan's Service - was designed by Ace Frehley and Paul Stanley in 1973. "This is Gene Simmons from Kiss. You know, I invented metal. Yes, both the music and the item." Ah, KISS. You wanted the best - but you got KISS instead. The hottest (investing) band in the world!
Posted by David Cotner at 10:39 PM No comments: 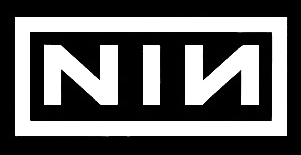 The Nine Inch Nails logo was designed Trent Reznor and Gary Talpas in 1989. Ironically, it represents balance and order when Reznor's lyrics and themes present anything but a pastoral vale of clean lines and architecture.
Posted by David Cotner at 10:33 PM No comments: 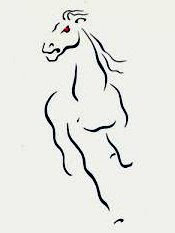 It is the deeply bizarre height of sadness and tragedy that we speak now about Phil Hartman in the past tense. He drew this horse - a paragon of economical lines leading directly to action and emotion - for Poco for the cover of their 1978 album "Legend." No truer a title chosen.

Designed by Michael Spaldin for White Spirit for their first single on Neat (Venom's label) in 1980. White Spirit was in the original 100 logos that started this blahg when I was scouring sites for heavy metal patches and punk badges for the survey that now numbers 1300+ rock band logos and counting. White Spirit guitarist Janick Gers went on rather famously to play guitar with Iron Maiden. Maybe Eddie goes falconing with the White Spirit bird of prey. 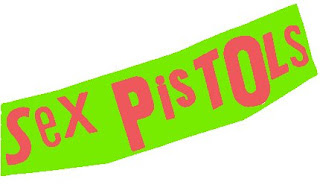 No "The" in "Sex Pistols" - they're the definitive article, not the definite article (as Pete Shelley of Buzzcocks use to say). Designed by Jamie Reid for the Sex Pistols single "God Save The Queen", released in July 1977, and ultimately the "Never Mind the Bollocks" LP. The sum of the logo's parts will always be greater than its whole - in as many ways as that Holist truism could possibly ever mean.
Posted by David Cotner at 2:13 AM No comments:

Kreator's mascot was drawn by Phil Lawvere for the 1987 "Terrible Certainty" LP.
Posted by David Cotner at 2:04 AM No comments: 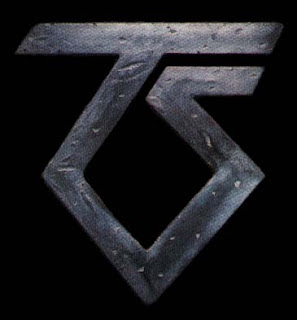 Designed by Dee Snider and Suzette Guilot-Snider in 1984.
Posted by David Cotner at 1:55 AM No comments:

Jos Kley of The Ex: "We designed it ourselves, soon after we started the band in 1979...together with some other bands, we were putting out buttons with our names on it and we decided to make ours look a bit different. So the "various straight angles" are basically an "E" and an "X"."
Posted by David Cotner at 1:46 AM No comments: 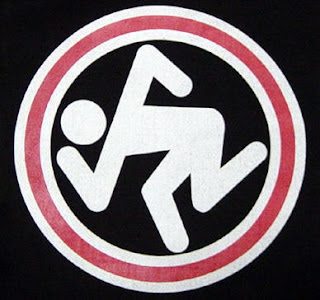 Eric Brecht, the original drummer for punk band D.R.I., designed the skanking pedestrian in 1982. From D.R.I. Central: "It was actually an art school project - the project was to design a logo for a company. The company was our record label Dirty Rotten Records, but we just absorbed it as our bands logo."
Posted by David Cotner at 1:36 AM No comments:

The so-called "angel's asshole" was designed by Anthony Kiedis for the Red Hot Chili Peppers sometime around 1984.
Posted by David Cotner at 1:42 PM 2 comments: 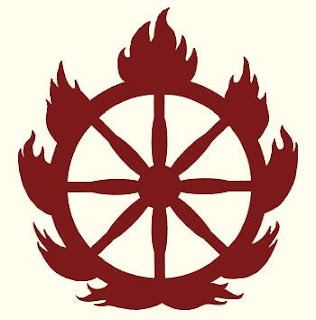 Shelter's Disc of Vishnu Chakra was adopted by the band in 1990.
Posted by David Cotner at 1:33 PM No comments:

It took me forever to find out that Joe Eula drew this famous silhouette of Miles Davis for the cover of the "Sketches of Spain" LP in 1960. You'd think people would know these things! Apparently not. Few are the performers that become logos unto themselves - only the giants like Davis and possibly The Mentors - cut such distinctive figures that creating a symbol from those figures is the logical thing to do. I can very vividly recall driving through the beauty of the Coast Highway in central California in the distant past, with an otherwise lovely woman (who shall remain unnamed), and hearing "It Never Entered My Mind" in one ear and her Technicolor inconsequentialities in the other and becoming very sad that we were doomed to separate because she couldn't hear how beautiful the music was and just stop. Just be. Is there such a thing as objective beauty? Miles Davis is as objective a beauty as can be - and I like knowing that that's something that'll never change.
Posted by David Cotner at 3:42 AM 2 comments: 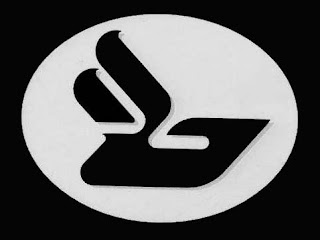 Paul White designed this icon for Björk, looking nothing so much as a swan stifling a sneeze, in 1993. Her latest effort is the beautiful and amazing "Wanderlust" video. Shame there's no song to go along with the video, though - the phrase "there's no "there" there" rather comes to mind. So, to alleviate your intense letdown, here's the Swedish Chef. Bjork bjork bjork.

I really wanted to give this post to Front 242, but they never had a distinctive band logo. I tried. Honestly I did.

Somewhat relatedly, the Guardian has a recent article mooing and prostrating themselves before the supposedly dying art of record sleeve design. Tempest, teacup, etc. You know what's really dying? Flexidiscs. No, wait.
Posted by David Cotner at 3:06 AM 1 comment: 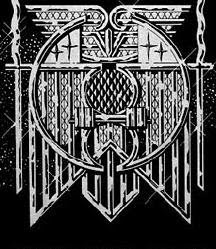 Created by Barney Bubbles (born Colin Fulcher, June 30, 1942 - November 14, 1983) in 1972 for the cover of the brilliantly titled "Doremi Fasol Latido" LP. An overview of the endlessly brilliant Bubbles is well-worth re-viewing and can be found here. Still wish I knew when his dates of birth and death were - the reason for that can be found here. Yes, I do work very hard at these things - thank you for noticing. Apparently Bubbles also directed the "Ghost Town" video by The Specials, which makes his passing all the more depressing for knowing it. Oh, yeah - Hawkwind. In business for four decades with one propulsive force - guitarist singer Dave Brock - thirty-five years on they're still performing their "Space Ritual" around the world and melting minds in the process even in this jaded day and/or age. They also gave birth to Motörhead. I'm deeply square and clueless but even I have to respect something like that. Also: Robert Newton Calvert of Hawkwind, March 9, 1945 - August 14, 1988. Lest we forget!

Somewhat sideways, the Song of the Moment is "Wehe Khorazin" by Popol Vuh.
Posted by David Cotner at 3:03 AM No comments: 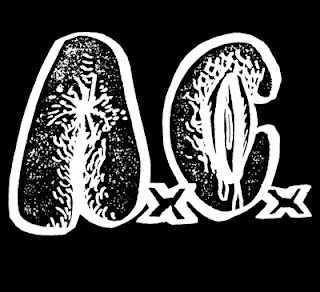 Designer: Chris Broduer, 1988. Replacing the "u" in the band's name with a helpful asterisk (*) rather crystallizes the whole concept just that much more eloquently, so I won't belabor the point. Grindcore band Anal Cunt are something that a lot of people don't get - but, in the words of Lo Pan, "You are not brought upon this world to "get it"." You either really like them or really hate them. The name sure gets you in the door, though - and sometimes that's all it takes. Band founder Seth Putnam has his own identity and voice - which means he owns his own soul, ultimately - and so I cannot fault them. And if that makes me gay - well, then it makes me gay.
Posted by David Cotner at 2:59 AM No comments: 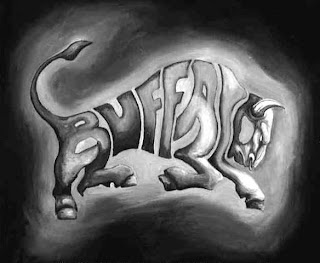 New Wave of British (or brutish, depending) Heavy Metal band Buffalo had its Holist bison designed by Geoff Ashworth and lead singer Mick Priestley. Priestley: "The Buffalo logo was an from idea of mine and designed by my friend Geoff back in the late '70s and I have used various forms of it ever since." Another rock band logo in the whole is much more than the sum of the parts - which is to say, were it only a hooved B, it'd be a terrifically funny logo indeed. The most popular NWOBHM bands at the moment seem to be: Def Leppard, Angel Witch, Girlschool, Samson, Diamond Head, Demon, Venom, Satan, Raven, A II Z. I sense a theme. Not to be confused with the burgeoning New Wave of Black Heavy Metal scene, naturally.
Posted by David Cotner at 2:55 AM No comments: