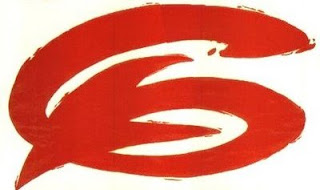 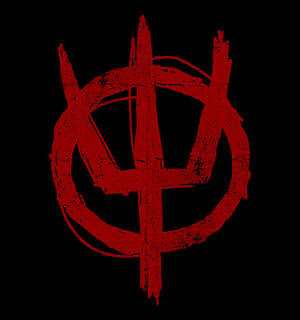 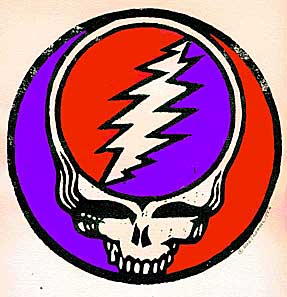 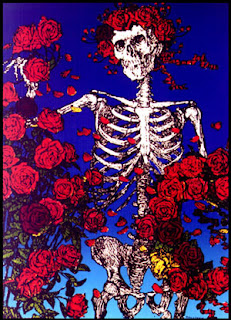 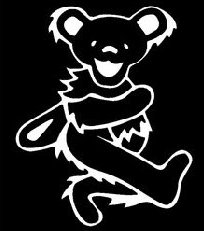 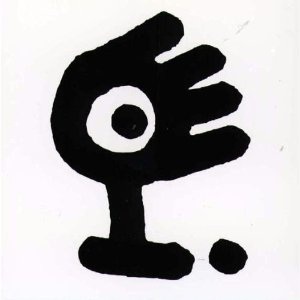 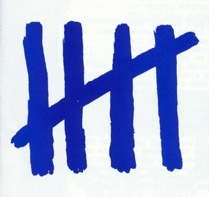 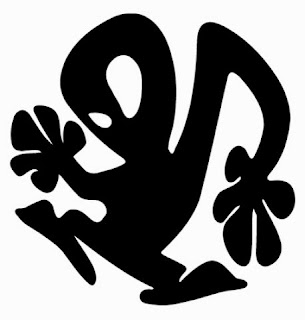 Designed by California artist Ron Cameron in 1991 and appropriated by Dominic Ayre for Plastikman in 1993. There's been a considerable amount of debate as to the provenance of this logo over the past twenty (!) years - Ayre was accused of filching it from some mysterious skateboard artist until Cameron himself helpfully cleared everything up here: "I did this for my own skateboard company called Strike (through Acme Skateboards), for the “Street Worker” model in 1991. Someone re-scanned it and sold it to Richie Hawtin in 1992 and claimed ownership. Richie found me around 1997, and everything was settled all cool-like. I’ve been friends with Richie since, and Plastikman is re-issuing the 1st LP in 2010, with actual plastic toys of this character - one for each song title, 12 total. "
Posted by David Cotner at 8:11 PM No comments: 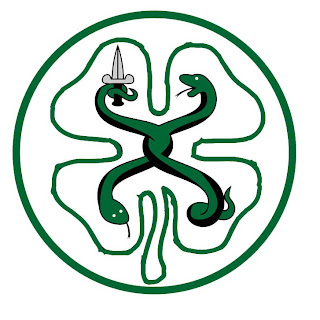 Designed by Flogging Molly in 1998 with the assistance of graphic design artist Brian Peterson. Founded at Molly Malone's pub on Fairfax Avenue in Los Angeles - and named by virtue of the fact that they played there so often and so loudly - the band celebrates their 20th anniversary next year. Singer Dave King got his start with the metal band Fastway (alongside members of Motörhead and UFO) and is married to Bridget Regan, the band's fiddler and tin whistler. I hope she tells people at cocktail parties that she plays tin whistle for a living.
Posted by David Cotner at 7:20 PM No comments: 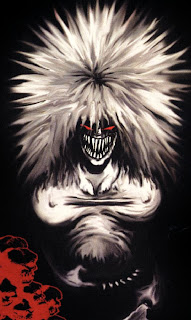 Martha Splatterhead was drawn and created by The Accüsed's guitarist Tom Niemeyer in 1984. For several years, The Accüsed broke up, but Niemeyer? Not dead! The explosion of metal bands is, however, inversely proportionate to the mascots they bring with them. If you wanted to point fingers at "false" metal, you could do worse to accuse - so to speak - those who are more obsessed with letters than with monsters. This is a fairly interesting hometown read in the Pacific Northwest Inlander (there's a mouthful for you) on The Accüsed from last year. Niemeyer: "(Martha) recently made her on-screen debut in our latest video, 'Hemline.' Now she’s got the acting bug, so anything’s possible…and anything you can imagine is nothing compared to what we have planned for Martha's fans!" Which would be ominous if it weren't so cheerful. The various incarnations of Martha over almost 30 years can be seen here, with early nods to the crossing-over of punk and metal that was such a big deal in the '80s. Remember getting all mad about that? Me, either.
Posted by David Cotner at 2:35 PM No comments: 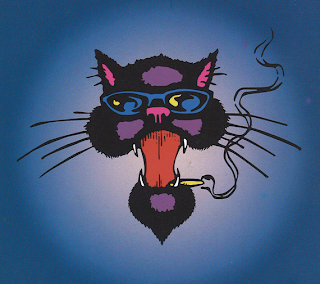 Blues Traveler's smoking cat was drawn by Tim Vega for the cover of their 1990 debut album. Joan Osborne sang back-up on that album; the peripatetic Osborne was an unknown and worked with New York avant merchants If, Bwana (!) at the same time. Blues Traveler arcana states that sometime around 1987, a black cat showed up at one of their jam sessions and became their de facto mascot. I wonder whatever happened to that cat. I can't say that I've paid attention to Blues Traveler in the slightest, but they do seem to make a whole lot of people happy - just like Peter Frampton did once; you can see them in all those amazingly massive concerts he used to do - and I can still hear John Popper's harmonica from "Run-Around" rattling around at the back of my head. So that, as they say, is something.
Posted by David Cotner at 7:24 PM No comments: 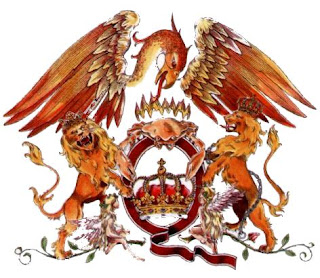 It bores me not to do this blog.

I had no idea there were so many followers of what I've written. I sincerely appreciate your interest and enthusiasm, one and all. Thank you.

Queen's suitably regal regalia was designed by Freddie Mercury in 1973, before the release of their debut album. Brian May: "That QUEEN logo, and the crest, were both entirely Freddie's design. He had been a student at Ealing Tech, of course...and those designs stayed with us, through various modifications, for many years. Freddie had a great eye for design." Like the fairies and the Phoenix, Queen had a flair for summoning up the great Britain of yore - a place of romance and hard-scrabble mystique that lives on within the folk tradition. It's a tradition that was revitalized by Queen through an eclectically electric vein of sonic sorcery that no one seemed to notice at the time. Magic has a tendency to hide itself.

Brian May once said, "You have to get away from the idea that playing music is a competition. You should just keep on doing what you think is an interesting thing to do." Wise words for any artist, really.
Posted by David Cotner at 5:39 PM 1 comment: