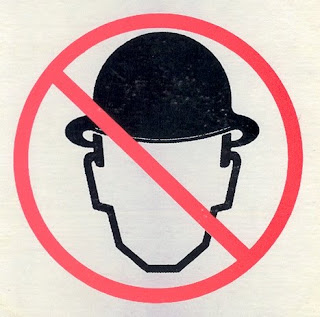 Designed by Monica Froeber for the band's 1980 "Folk of the '80s" release - although actually this logo is a rallying cry against men with hats, but it's so simple and eye-catching with the black and the red arranged so sparingly that we can forgive the semantic shortcomings and wonder whatever happened to...Monica Froeber! Men Without Hats had two rather fine pop singles - "Safety Dance" and "Pop Goes the World" - and if that's all they ever made and then vanished, they would remain avatars of perfect pop. Instead - look out casinos! Here come Men Without Hats! Cue Metallica in one, two...
Posted by David Cotner at 2:42 PM 1 comment: 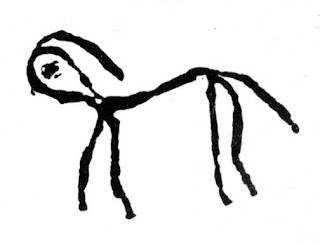 I love following up something like Take That with something like Distorted Pony. David Uskovich, guitarist with the industrial / noise rock band, remembers: "Around '88 or '89 - maybe as early as '87 - Dora Jahr, bassist, made an abstract "pony" out of clay. She rolled the clay into ropes. I can't remember, but I think the head, body and tail were all one piece, with separate pieces for the legs and the "eye," which is that big circle in the middle of the head. It was like a 3-D version of a line drawing. She probably still has that thing. One of us, or maybe it was Robert Hammer or Theodore Jackson, had the idea to slap some black paint onto the clay pony and then press it onto a piece of paper. The results were pretty cool, as you have seen, so we decided to have some rubber stamp maker make us a rubber stamp from the original print and Bob's-your-uncle: instant portable logo-maker. We definitely used it for the first single. We were all total industrial dorks, so the fact that the Pony logo resembled the Einsturzende Neubauten logo was not lost on us."

Distorted Pony re-united this year in Los Angeles; sometimes it takes years for people to catch on. The world needs ditch-diggers - and grave-diggers - too.
Posted by David Cotner at 1:44 PM 1 comment: 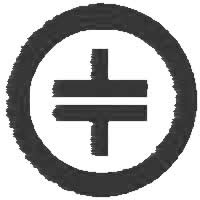 The one-time teen sensation's logo was designed by T&CP Associates in 1992. If ever there was a logo suffocated by its own cynicism, it's this one.
Posted by David Cotner at 1:38 PM 3 comments: 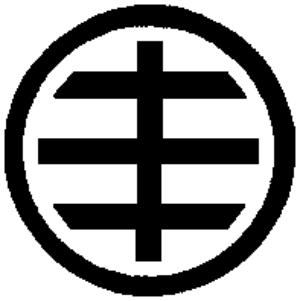 Hüsker Dü was graced by this particular sigil by band member and designer Grant Hart in 1980. I received this nice note from Grant Hart some time ago, discussing in-depth the other, more identifiable logo. "In 1978-1979, I was enrolled in the Advanced Graphic Arts Program taught by Will Wachtler at South St. Paul High School. We learned to set type by hand and a few of us were taught to operate and maintain Heidelburg automatic offset presses. The details of paper and ink were stressed, as well as inspection and recycling of worn type. I did so much proofreading without running actual proofs that I could read upside-down and backwards nearly as fast as I could a printed page. It was during this time that I became involved with the two others that would form the band Hüsker Dü. Punk rock posters and the photocopier were advancing and there was a tremendous merging and emerging in and of the graphic arts.

An early poster for a performance of the band was printed in dark orange ink. The band name was set in a medium Helvetica type with two colons from a smaller font leaded in to form the umlauts over the "u" in "Hüsker" and the "u" in "Dü." This took place between late March of 1979 and early June of the same year, when I graduated and subsequently lost access to the facilities of the high school Graphic Arts Department. It was not long before the young band had need for another poster. Having no real type to use, and not wanting to use the "ransom note" method of clipping out individual letters, I cut out the band name from the dark orange poster for the next one. To add visual impact, I carefully tore the words horizontally and pasted them together with a gap between the top and bottom portions. I wasn't experienced with the inexpensive photo-offset presses that used a plate made of paper to deliver the ink to the paper to be printed on. These machines have disappeared from the face of the Earth due to the technical advances of photocopies, but I digress. The first attempt at printing the poster failed because elements that were lighter-than-black came out mottled and not too readable. Not having time to re-design the whole thing, I took up a Sharpie felt-tip and colored in the words quickly but carefully. The next attempt at printing was a success and the band immediately recognized the result with approval. It was varied in its use, printed backwards and psychedelicized. It has been spoofed and rearranged to spell out names of nightclubs, record stores and other bands, and I have seen at least eight tattoos of it on people's bodies."
Posted by David Cotner at 5:48 PM 1 comment: